My Romania > Blog > LOST IN TRANSYLVANIA

on March 4, 2009 in Blog
Share
We were following the little used backroads of Transylvania, lost somewhere in the middle of Romania. And when I say little used roads, I’m not lying a bit.
I was the guide and interpreter, leading two Dutch tourists, to discover the unspoiled Saxon villages of Transylvania.
Not only was I driving but I also had to find my way along the narrow roads, winding their way up and down hills, with no trace of any signs. Every crossroad looked the same as the last one, and I needed all my powers of intuition to make progress.
We were somewhere between Fagaras and Sighisoara, trying to head for our overnight accommodation with village families in Soars. Everywhere we saw endless hay meadows. The smell of wild flowers mixed with acacia and elderflower was coming through the car’s open window, and from time to time, from miles away, we could see, perched on the hills, villages with their fortified churches.
The Saxons came to South-East Transylvania in the 13th century, invited there by King Geza II. In exchange for free land and low taxes, they were to defend the Transylvanian border against the aggressive waves of migration. But the biggest enemy during that time became the Ottoman Empire, which threatened at Europe’s gates.
The Saxons built strong fortified churches. In case of attack they withdrew inside the walls. That is why they always kept the village supplies (pig fat, corn, wheat and so on) within the church’s towers.
History was not kind to the Saxons in this part of the world. After centuries of fighting with Turks and Tartars, there followed the deportation to Siberia at the end of the World War, and then the hard times of the Communist regime.
It was with tears in her eyes that Sara Dotz, a Saxon lady who holds the key to the church at Viscri, told us, “We survived 800 years here. We survived wars and we survived the communists. But now the Saxons have left their culture and their homes. They went back to Germany, hoping for a better life.”
When we passed the village of Rodbav it was almost sunset. The cows were returning from the pasture, walking lazily in front of the car and then waiting by the gate for someone to come and open it for them. We decided to stop to admire the cow parade.
We cast our eyes up to the church on top of the hill. It seemed empty and ruined. Why not to be adventurous and visit it, we asked ourselves. It’s quite an adventure to visit some of these Saxon churches. Because there aren’t many Saxons left, they tend not to be used anymore, so usually these 14th-15th centuries masterpieces are empty and in an increasing state of decay. Also, to visit you need to find the person who can open up the place.
So we embarked on our challenge to find the key-holder of Rodbav church. Remember that we were in a quiet, remote village, where cars rarely pass and where nothing unusual happens. Suddenly two West European looking guys and a Romanian girl who from time to time speaks a peculiar language with them, start to walk around the village and to ask about the church key. But the villagers were extremely happy to help us, smiling all the time.
We finally found the appropriate lady, and she was delighted to see people who were interested in her church. She quickly prepared herself for the visit, changing into what she called “proper clothes”. First, she had guests; second, she’d be going to the church. So it was improper to wear one’s day-to-day work clothes. 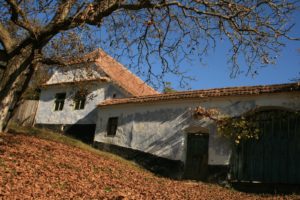 Slowly we climbed the hill together, making a path through the tall, unmowed grass while listening to the lovely village stories from our new friend.
A big iron key opened the church door. I was translating the lady’s stories about the village and the church, and then Cron said something in German. Her eyes started to smile and her whole face lit up. I instantly became lost and useless. They started to speak German, a language unfamiliar for me but used day to day by the old Saxon families. She was so happy to have the chance to speak German with somebody that she just couldn’t stop smiling.
I’ll always remember that face.
Now it was me the guide who needed translation, and I kept asking what she was saying. At least in the end I was able to say to her, “Auf Wiedersen!”