on March 5, 2009 in Blog
Share
I remember very well when I sow Richard first time. I had arranged to meet him in the airport, a man who had been investigating the few traditional skills that has survived in U.K. He had been to Romania a couple of times before and had been fascinated by the way that traditional life seems to have survived in Romanian and he was anxious to delve a little deeper into Romanian villages. I had been advised that an interpreter will save him significant time and frustration. He felt that is so much more to learn if only he could understand the information, which the Romanian offered so freely in their own language.
I expected in the airport a man carrying a backpack, ready to climb (scale) the hills and mountains to discover the remote Romanian villages and isolated crafts people. However, much to my concern, the man who cautiously acknowledged my hand written attendance placard was wearing a smart blue business man suit, a pristine white shirt and neck tie!
He nervously explained the purpose of the trip in a hesitant manner. I discovered later that originally Richard had assumed that his interpreter was going to be a mature academic and was initially rather alarmed at the sight of a pretty young lady. “This girl has no knowledge, understanding or interest of the purpose of my visit and any initial enthusiasm she may have will quickly disappear after a couple of false starts.” After all, people that Richard is interested in are not on the tourist route and they are frequently hidden away in the least obvious and sometimes inaccessible locations. 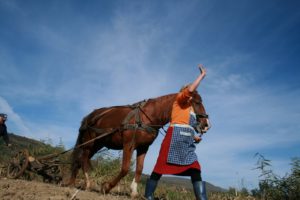 Some of the most fascinating and skilled people we met have been quietly continuing their skills for many generations, providing an invaluable service to village life and their appear never to be acknowledged and frequently we found that this was the last generation to make or repair goods only for the village needs.
Some were initially surprised at our curiosity, most of them quickly realized that we had a totally genuine interest in their skills, their products and their traditions. Without fail we always come away having increased our knowledge and were further uplifted by their generosity and hospitality. “So often we interrupt a busy and hard working craftsmen’s day but always feel humble by their unfailing generosity and hospitality”.
The first visit was obviously a success in so much this winter Richard had returned to Romania the sixth time and we still manage to find different aspects of traditional skills and culture.
Over the last few years we have researched the traditional use of various type of wood and in particular cooperage skills. In fact this is one of Richard’s specialties: “I photographed coopers in many parts of the world, but always feels that the Romanian coopers are the most traditional ones.”
Another one of Richard’s special interest is the brick industry and hand made kiln dried and sun dried bricks are still made in Romania today in much the some way as the Egyptians made them over 6000 years ago.
On the subject of clay some claiers are suitable for pottery. It was a great joy on our last trip to find a few of the rural potters producing domestic ware in the old localized tradition of designs and forms that had been in their family for many generations – again not tourist goods but sold at the village markets at very modest prices for the local villagers.
We discovered the techniques of straw hat making in the north, thatching with Romanian reed down in the Danube Delta, we found one of the last wooden boat builders.
Regarding to Romanian females skills, their spinning techniques have not changed since earliest times and Romanian women are always busy and therefore at is not a common sight in rural area to find women spinning on the move. Perhaps while attending cattle or simply walking to the wheel or to the village shop. Romanian women plays a significant role, often caring out hard physical task such as lady blacksmith we found who thought nothing of wilding a 3 kg blacksmith hammer or the wheelwrights wife who again helped shrink on the red hot metal tires for the ox or horse-drown farm carts.
In addition Romanian women always produce irresistible wholesome gourmet meals at the drop of the hat. One of our favor is been the blueberry ice-cream in the Apuseni mountains.
We have sampled various potencies of home made distilled plum brandy from north to south, east to west and find ourselves “connoisseurs” of this rural fire water.
Because our trips are frustratingly unplanned, accommodation can be unpredictable. Great variety of accommodation: from former communist hotels with dodgy lifts to humble country farm cottages to the ostentatious lures pink houses that we tried desperately to avoid, to the monasteries. In fact, Richard favored accommodation was the austere cell in an Oltenian monastery. After a long day and being unsuccessful in finding suitable accommodation come across the monastery late in the evening. The nuns kindly opened the richly carved gates and thankfully agreed to provide hospitability, together with a surprisingly rather simple, but much welcomed meal.
We are sometimes dependent upon local help in locating our craftsmen. This is not without certain problems we have frequently encounted villages with over helpful advice who seemed to have consumed far to much brandy, even before 9 o’clock in the morning. It took all my experience as a guide to ease the drunkard out of the car.
Over the years we had magic moments as: popping with Eric Clapton along the Danube, chatting with ladies in Vrancea region village, giggly at the sight of the strangers, playing with an 80 years old musician who had invented a bizarre metal trumpet-violin or enduring below freezing temperatures and cutting through the ice on a mission to find reed cutters and traditional fishermen on the Danube Delta. Every time Richard return he says this will be last time. We really have covered Romania, but he never surprise me when after just few months later I receive a phone call saying: “Oh, I hope to be visiting Romania in a few weeks time. I wonder if you are going to be free”?

P.S. I had just received such a call from him and he is coming to research Romania in March time.